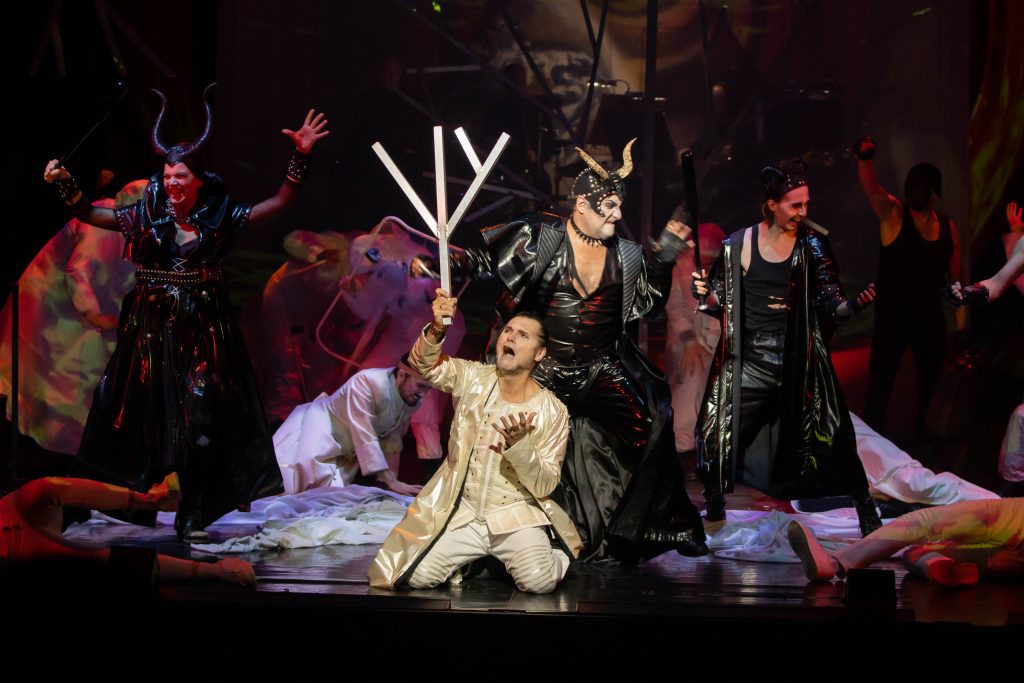 “With rock music out of Paradise”

[The show] yesterday night belongs to those that will always stay in one’s memory, create the flair of a big city, and justify the standing ovations.

The rock opera “Last Paradise Lost” by Günter Werno, Andy Kuntz, Stephan Lill, and Johannes Reitmeier features great singers, among them Randy Diamond as Lucifer, whom I tell to “break a leg” at the stage entrance. The performance is a production by Johannes Reitmeier under the musical direction of Andreas Kowalewitz.

In the back of the stage, Vanden Plas are playing:  Günter Werno on piano and keyboards, Stephan Lill on guitar, Torsten Reichert on bass and Andreas Lill on drums. They are separated [from the action on stage] by a  translucent fabric. At the same time, the symphonic orchestra is responsible for the more quiet tones from the orchestra pit.

The two fabric tubes that stretch from the ceiling to the floor look like giant test tubes. In them is life, Adam on the left, Eve on the right, as God created them, both singing beautifully and undergoing a metamorphosis from innocent and blind to seeing into a dirty gray. Frank Kühfuß and Amber-Chiara Eul are the first humans.

What at first looks like ice crystals in the sky is actually the Tree of Knowledge, which later goes up in flames.

[From that fire], the Archangel only manages to save a tiny seedling. The role [of Archangel] is played by Andy Kurz, of course dressed in a white robe, innocent, immaculate, convincing the good, with a clear voice, which is presented with great purity by the musicians. [Archangel’s] great antagonist is Lucifer, the fallen angel, Randy Diamond. Dressed in black clothes with studs and equipped with devil horns, he does a great job, the way he looks at the apple while his mouth seems to be watering, when Eva is still wondering if she should take a bite, the way he tilts his head, the way his mouth opens, the way he sings, this incredible presence. I don’t think he needed my wishes of “break a leg.”

The fallen angel Lucifer has enemies from his own ranks, too. Beelzebub and Belial think of themselves as the true devils and fight for the rule [over Hell]. Both are dressed in black, too. Also equipped with horns, Beelzebub is played by Milica Jovanovic who is fabulous in this role: dominant, confident, a great voice.

And Belial tries to disguise himself as an angel, which doesn’t quite work out. Edward Roland Serban in the role of Belial presents real comedy when he puts on an oversized angel wig. He sings devilishly well, but neither him nor Beelzebub can compete with Lucifer.

At first, they need to deal with the portal to Hell. By the way, the people at the theater did an amazing job with this scene: There is a web of red ropes in which the devil gets tangled in again and again. Two fallen angels are assigned as guards. The choir also provides the rich content, sometimes divine, sometimes devilish, but always solid.

A wonderfully dynamic, rich, rocking premiere, which everyone should have seen, especially because of Lucifer. A worthy sequel after […] “Everyman”.