Review of Anima One by SWR 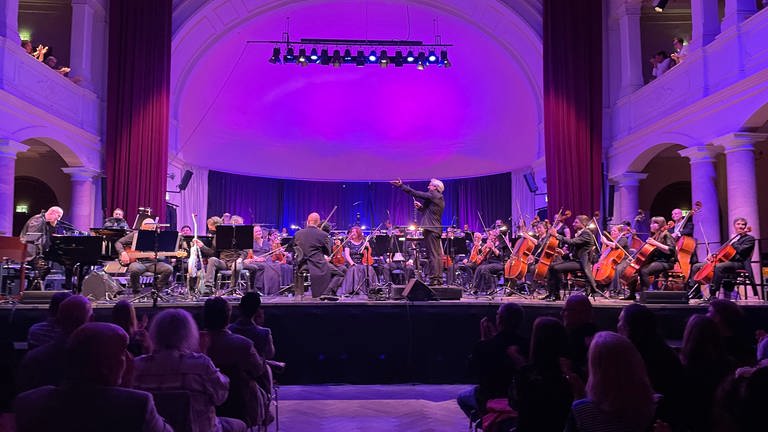 Vanden Plas and orchestra wow audience in the Fruchthalle Kaiserslautern

A rock band playing together with an orchestra? No way, that won’t work! That’s what many people may think. In the Fruchthalle in Kaiserslautern, Günter Werno proves all skeptics wrong.

“I have the impression that the two musical genres complement each other when you get involved in them.” – Günter Werno

Rock and classical music – both go very well together, says Günter Werno. For many years, he has been one of the creative minds of the band Vanden Plas. But why do these opposites, rock and classical music, fit together so well? Werno explains, violins are used in pop or rock ballads to create an emotional mood. Timpani and French horns also go well with an electric guitar.

On Friday evening, this theory was applied in practice in the Fruchthalle venue in Kaiserslautern. There, Günter Werno proved how well both music genres actually fit together. Together with Vanden Plas, he has rocked the Fruchthallte many times before. Last Friday was another one of these events. For the world premiere of “Anima One”, Symphonic Concerto No. 1.

Caption: Rock and classic – do they fit together? Günter Werno set out to provide the proof in the Fruchthalle Kaiserslautern on Friday evening. Together with Vanden Plas and orchestra. Photo: SWR

Thunderous applause even before the premiere began

The evening already had a promising start: the orchestra under conductor Pavel Baleff, chief conductor of the Baden-Baden Philharmonics, played the overture of “King Stephan” (“König Stephan”) op. 117 and the Symphony No. 5 in D major by Ralph Vaughan Williams.

After that, it was time for the event that the numerous fans of Vanden Plas and Günter Werno in the audience of the Fruchthalle had been eagerly looking forward to: the world premiere of “Anima One”, symphonic concerto No. 1 for rock band and orchestra by Günter Werno. Conductor: Pavel Baleff. Even before playing the first note, the musicians received thunderous applause.

An unforgettable sound experience in Kaiserslautern

The three movements evoked the idea of an exciting journey. In the first movement, the audience experienced a delicate rapprochement of piano (Günter Werno) and orchestra. The two “sides” stimulated each other on relatively quickly, which resulted in a brilliant sound enhanced by the tone of the band and the orchestra. A sound that many of the people in the audience had probably never experienced before.

A rock band consisting of electric guitar, electric bass, drums, organ synthesizer and piano, together with an orchestra – that’s something you don’t hear every day. And anyone who attended this event in the Fruchthalle will not forget this sound experience that easily.

But also the musicians obviously enjoyed themselves. A rather unusual sight that delighted the audience: some of the orchestra musicians rocked along in time when the band played. The only thing missing was some headbanging.

Günter Werno seemed relieved after the first movement. He and conductor Pavel Baleff nodded and smiled at each other. And they had reasons to do so. The audience was so overwhelmed they were  applauding thunderously between the first and second movement.

Andy Kuntz and Astrid Vossberg on the microphone

According to “saving the best for last”, the highlight of this musical evening in the Fruchthalle Kaiserslautern happened in the third and last movement: As soon as Vanden Plas singer Andy Kuntz and singer Astrid Vossberg entered the stage, the audience went wild. Andy and Astrid performed the duet that Günter Werno had written for his wife as a wedding gift. The third movement was accompanied by the Anima Choir consisting of Ines Pawlowski, Charlotte Lisador and Günter’s wife Lisana Werno herself.

Caption: In the third movement, Andy Kuntz and Astrid Vossberg take the microphones and make the audience in the Fruchthalle Kaiserslautern go wild.

This extraordinary evening in the Fruchthalle ended as expected after such an evening: the audience went wild with enthusiasm after these emotionally charged hours. No one stayed in their seats any longer. The audience got up, applauded and cheered – a seemingly endless applause. An appropriate conclusion to an unforgettable concert evening in Kaiserslautern.

Caption: After the symphony concert, there were standing ovations in the Fruchthalle in Kaiserslautern.