Review of Anima One in Die Rheinpfalz 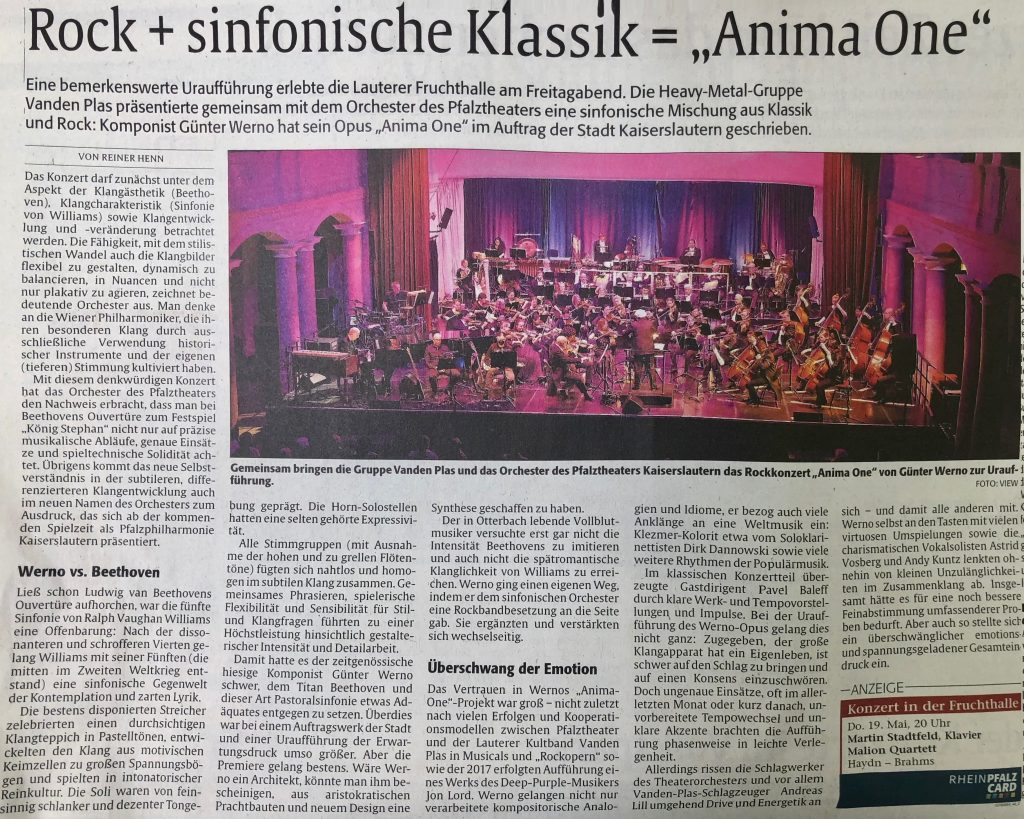 A remarkable premiere took place in the Fruchthalle Kaiserslautern on Friday evening. The progressive metal band Vanden Plas and the orchestra of the Pfalztheater presented a symphonic combination of classical music and rock. Composer Günter Werno wrote his work “Anima One” commissioned by the city of Kaiserslautern.

The concert can be considered from the perspective of sound aesthetics (Beethoven), sound characteristics (Williams’ symphony) as well as sound development and change. What is that distinguishes certain orchestras from the rest? It’s the ability and flexibility of shaping the pictures evoked by sound, dynamic balances, and using nuances instead of only striking effects. The Vienna Philharmonic Orchestra has cultivated its special sound because of their use of historical instruments and their lower tuning.

With this memorable concert, the orchestra of the Pfalztheater proved that Beethoven’s overture to the Festival “King Stephen” is not only about precise musical processes, precise cues and technique. Starting with the next season, the orchestra will be called “Pfalzphilharmonie Kaiserslautern” (= “Palatinate Philharmonic Orchestra of Kaiserslautern”). This new image is expressed in the more subtle, more distinguished sound development.

While Ludwig van Beethoven’s overture already made a great impression on listeners, the fifth symphony by Ralph Vaughan Williams was a true revelation. After his more dissonant and harsh fourth symphony, Williams’ fifth symphony (written during the Second World War) offers contemplation and soft poetics.

The masterful string section wove a transparent sound structure in pastel moods, developed the sound from motivic cells into large suspenses and produced a pure and perfect intonation. The soli were characterized by a subtle and gentle tone. The solo parts of the French Horn section came with rarely heard expression.

All instrument groups (with the exception of the high and too garish fluts) merged together seamlessly into a gentle sound. Phrases were delivered in unity, there was playful flexibility and a sensitivity to style and sound. All of this combined led to peak performance in terms of creative intensity and details.

Therefore, it was difficult for the contemporary composer Günter Werno to oppose something adequate to Beethoven and the pastoral symphony by Williams. Furthermore, the fact that Anima One was a commissioned piece by the city and a world premiere only created more pressure and expectations. But the premiere turned out to be a great success. If you compared Werno to an architect, then you would testify that he created a synthesis of aristocratic magnificent buildings and new design.

Werno the thoroughbred musician who’s living in Otterbach did not even try to imitate the intensity of Beethoven, nor did he try to achieve the late Romantic sound by Williams. Werno did things his own way by adding a rockband to the symphonic orchestra. They complemented each other.

After the successful cooperation between Pfalztheater and Vanden Plas in musicals, rock operas and the 2017 performance of a work by Deep Purple musician Jon Lord, there was a lot of confidence in the success of Werno’s “Anima One” project. Not only did Werno achieve compositional analogies, he also included many hints of world music: there was a Klezmer moment in the solo by clarinetist Dirk Dannowski as well as many other rhythms of popular music.

In the classical part of the concert, guest conductor Pavel Baleff fascinated with his precise impulses. During the premiere of Werno’s piece, this did not quite work. However, one has to admit that the orchestra has a life of its own and is difficult to unite on one beat. Inaccurate cues, often only at the very last moment or slightly belated, unprepared tempo changes and unclear accents in a few phases led to slight embarrassment.

However, the percussionists of the theater orchestra and above all Vanden-Plas drummer Andreas Lill immediately took over drive and energetics and guided everyone.

Werno himself with his virtuoso passages on keys as well as the vocal soloists Astrid Vosberg and Andy Kuntz managed to distract anyway from small inadequacies in the interaction.

More rehearsals would have been necessary for a better fine-tuning. Nonethelss, the premiere created an exuberance of emotion as its overall impression.