Another Review of “Last Paradise Lost” in Münster 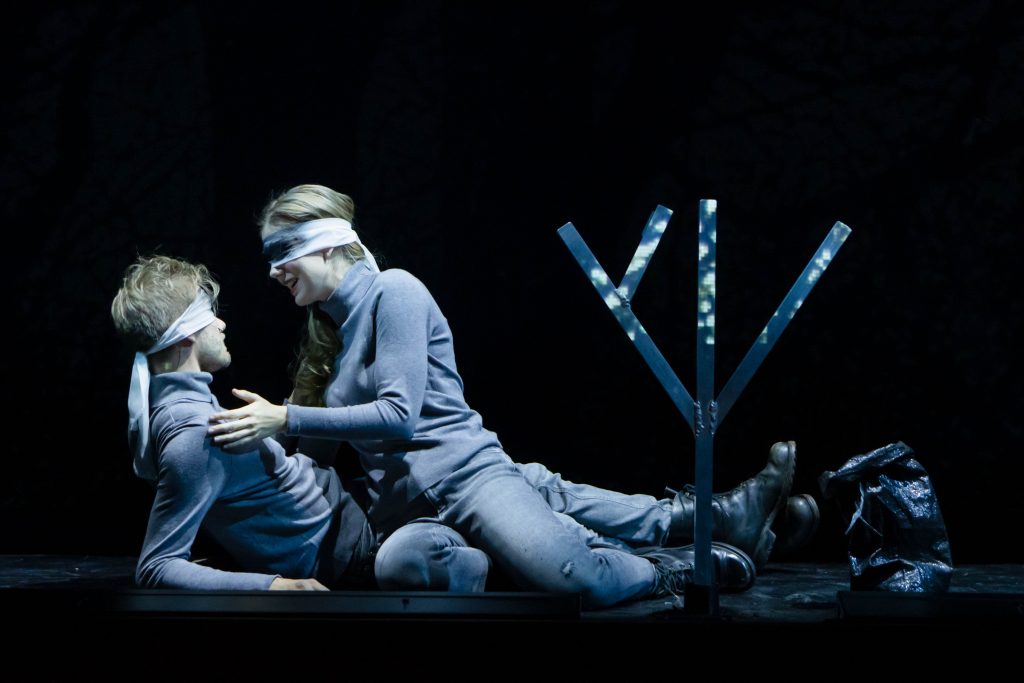 Münster – Lucifer shoves aside the red wires that were under power moments ago. Step by step, his black-clad, greedy pack supports him in his endeavor of leaving hell. The gatekeepers are bribed, and now the evil wants to ruin God’s creation. The final battle for the world is staged in Münster with colossal force and an ruthless abundance of power. Adam and Eve are in danger.

Precisely staged crowd scenes like this [one with Lucifer and his gang] are the strength of the premiere “Last Paradise Lost”. Günter Werno (music), Andy Kuntz and Johannes Reitmeier (libretto sequence of scenes), and Stephan Lill are responsible for this rockopera. The story is based on John Milton’s epic poem “Paradise Lost” (1667), an early modern version of Genesis that consists of over 10,000 verses and was composed in iambs. Milton was employed at the English court. He knew Oliver Cromwell’s political measures and had read Shakespeare’s royal dramas. Milton equipped his Lucifer with this ruthless force that approves of any perfidious strategy in order to achieve the goal of domination. Randy Diamond stars as Lucifer in Münster and displays a great stage presence. His devil horns, spike cap, wide black coat and steel claws offer a spooky style. Michael D. Zimmerman created fantasy fashion inspired by comic and movie idols with a theme that also allows for ironic moments.

[Lucifer’s] opponent is Andy Kuntz as Archangel, who engages in emphatic vocal duels with Diamond. A powerful guitar solo announces him as God’s servant.

From their island that is veiled with a transparent cloth, the band Vanden Plas accentuates the voluminous sound from the orchestra pit. Conductor Andreas Kowalewitz and Münster’s Symphonic Orchestra keep setting hymnal keynotes that tell the listeners that [the story] is about nothing less than life itself.

With fast guitars, keyboard effects, and drum blasts, Vanden Plas frames the sound with rock music from the 70s/80s. The progmetal band […] around Günter Werno (keys) and Stephan Lill (guitar) alreadycreated the rock oratorio “Ludus Daniels” (2008) and the rock mystery “Everyman” (2015). The presentation [of their latest work] is reminiscent of the narrative presentation of medieval morality plays when the main scenes function as individual chapters and are shown head-on to the audience.

Director Johannes Reitmeier relies on visually sophisticated theater images. Like prototypes or lab rats, Adam and Eve are placed inside veiled tubes that protude into the stage’s sky. [Adam and Eve] are pawns for the mighty, but they differ from the characters in the biblical story of Genesis . While Archangel and Lucifer gather a typified staff around them, Frank Kühfuß (Adam) and Amber-Chiara Eul (Eva) are youthful and fresh and after the fall, they are dressed in stylish gray. The couple carries the sensual and empathetic moments. Concerning their voices, however, both actors seem to be struggling against the volume of the rock music. The opposing forces Archangel and Lucifer tug at the white cloths that initially protected Adam and Eve as if they had been babies. These are the images that repeatedly inspire the audience to give applause and cheers.

For the storm on paradise, Belial dresses up as an angel with a glittering cape. Edward Roland Serban plays this mean idea generator of Lucifer’s battle force and creates him as a quirky sidekick. In contrast to this, Milica Jovanovic makes a big impression as Beelzebub. Her leather bustier and the black shimmering horns play with sadomasochistic eroticism . This creates some sizzling moments for Münster.

The opera choir completes the scenes with a great sense of space. This time, there is a lot going on choreography-wise, which was prepared by Anton Tremmel.

An especially playful moment is the scene in which Lucifer hands out apples from his cloak and gives them to the other fallen angels. They cheerfully anticipate the effectiveness of this device: Eva will bite the apple after an elegant snake in a net shirt (Fabiana Locke) will have offered her the fall of mankind. Next, the archangel is standing there with a shining sword. Paradise is lost.

And with scattered rays of light , the vertical dimension of the room is emphasized as if something divine was added, like in a Gothic cathedral. Thomas Dörfler (stage design) created soulful, coherent and mostly brimming pictures for good and evil.

At the end, video sequences from wars, a nuclear flash and the collapsing World Trade Center (September 11) can be seen. Instead of a loss of paradise, [the rock opera] “Last Paradise Lost” shows us that we still have a chance to save our paradise, planet Earth. God gave Adam and Eve the opportunity to decide for themselves. What is the basis of our knowledge? It looks like everyone in Münster got the message. Thunderous applause and standing ovations .